The Yucca and the Moth

This is the story of an unusual relationship between two very different types of organisms.  In the natural world this is called symbiosis or mutualism.  It is a relationship that benefits both species, but harms neither.  This kind of relationship actually can be found fairly often since many plants and animals seem to have evolved together for this very reason, but this relationship is unique.

The yucca is a very hardy drought-adapted plant that can be found in elevations of 3,000 to 8,000 feet. Yuccas have blue-green to dark green stiff leaves which taper to a point, sometimes a very sharp one depending on the species.  These leaves grow in a rosette shape around the plant.  Most yucca do not have an actual stem.  They are found in all North American deserts, Mexico and some mountain areas. Nine species of yucca are native to Arizona.  It is an important ethnobotanical plant, having been used by early indigenous peoples for many purposes.  Yucca fibers were used to make baskets and sandals, mats, food, and soap.  Modern-day gardeners find the yucca to be an easy to grow ornamental plant for their native garden.   The plant blooms in summer, with some species sending up an impressively tall flowering stalk which, unlike its Agave cousins, can return year after year.  Flowers range in color from cream, greenish-white to purple and combinations thereof.

Yucca moths (Tegeticula yuccasella) are actually a group of more than a dozen different species of small, rather nondescript whitish-gray bronze tinged moths.  Each species seems to pollinate a different species of yucca, so these relationships are mostly exclusive.  An exception are the flowers of Whipple’s Yucca, which  produce nectar that allow it to also attract daytime pollinators, but it too is pollinated by the moth.

During the day, the female moth rests among the yucca flowers.  At night, when the flowers begin to bloom  she emerges to gather pollen.  As she visits individual flowers, she takes the pollen from one to another and forces it down the tube of the stigma.  She then pokes a hole through the wall of the ovary with her ovipositor and lays her eggs in the ovary of the flower.  As the larvae develop, they eat some of the developing yucca seeds.  Once mature, the larvae eat through the fruit and fall to the ground to pupate. 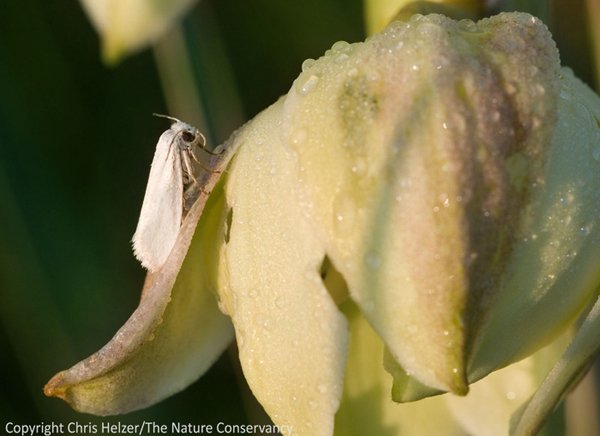 The female moth never lays so many eggs that the larvae would eat all the seeds and kill the plant.  How does she know how to do that?  Yucca seeds provide the only food for the yucca moth larvae, so they need the plant to survive.  It is a balanced relationship – the moth pollinates the plant and in exchange the plant provides food for the moth.

The best time to view moths in yuccas is just after sunset.  So we invite you to find a yucca,  and pull up a chair.  It’s the perfect way to spend a summer evening.