Ruddy Ducks are widely dispersed in North America. These small stiff-tailed ducks appear in large numbers on our lakes in the fall. Most have headed for more northern breeding territories by the end of March. Look for them in tight flocks diving for their food.

In breeding plumage, the small, stocky males have bright blue, broad bills. Their bodies are reddish-brown with a black head and white cheek. They often swim with their tails held straight up. Females are brown year-round and their heads have a dark crown and a lighter cheek with a line through it.  In winter the male looks similar to the female. However, its cheek remains white.

Preferred food consists of aquatic plants and insect larvae, and aquatic snails from the lakebed ooze.

Unique courtship displays involve “bubbling”. Males thump their blue bills against their chests which produces small pond ripples and bubbles. The process often ends in an odd croak. Ruddy Ducks do not initiate courtship or acquire mates until they arrive on their nesting grounds.

Ruddy Duck nests are well concealed in tall emergent vegetation and are often floating platforms attached to cattails or bulrush. They will sometimes cover nests by pulling vegetation from above and anchoring it to the nest. Most Ruddy Ducks only produce one brood, but in southern Arizona a longer nesting season may result in two broods.

A clutch consists of 6 to 8 creamy white eggs. Similar to other ducks, males usually abandon the female during incubation which lasts for about 24 days. High clutch numbers may result from egg dumping, a parasitic practice in which females lay eggs in nests other than their own.  Females abandon their broods in 2 to 4 weeks well before ducklings can fly. Some males accompany brooding females, but these ducks are not the broods’ parents. They are simply attracted to females.

Used with permission of 5enses, where it appeared in the February 2018 issue.  Photo by John West, by permission. 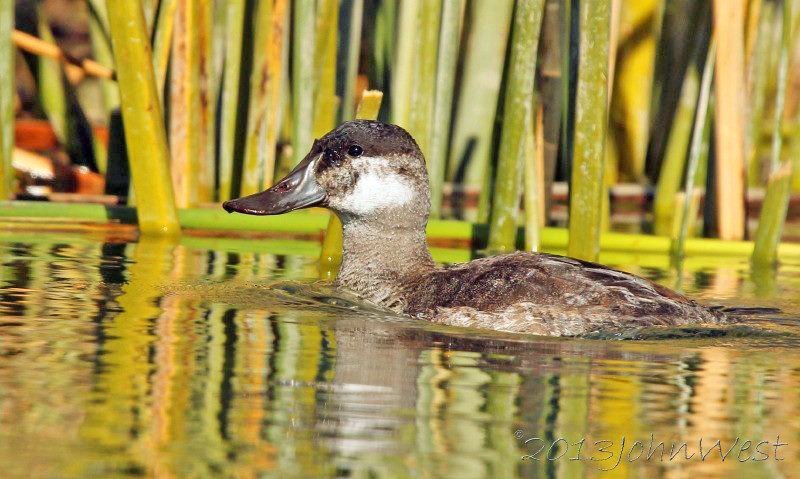