This month’s interesting insect is the praying (or preying) mantis.  It looks like a creature from another planet.  Imagine if it was our size instead of just two inches long, or less.  Mantids are a fairly small order of insects, having only 2,300 species worldwide, and only twenty of these live in this country.  The one most commonly seen in the Central Arizona Highlands is probably the California Mantid (Stagmomantis Californica)

Mantids have long, slender bodies, with triangular-shaped heads, containing three simple eyes and two compound eyes.  They can turn their heads nearly 360 degrees, which makes them remarkably effective predators.  Adult mantids have one ear, located at the junction of thorax and abdomen.  Baby mantids have no ears until the end of their third molt, when ear development begins.  Ear development is complete by the end of the sixth molt.   Mantids have a long, complicated development phase, molting six to nine times before reaching maturity. 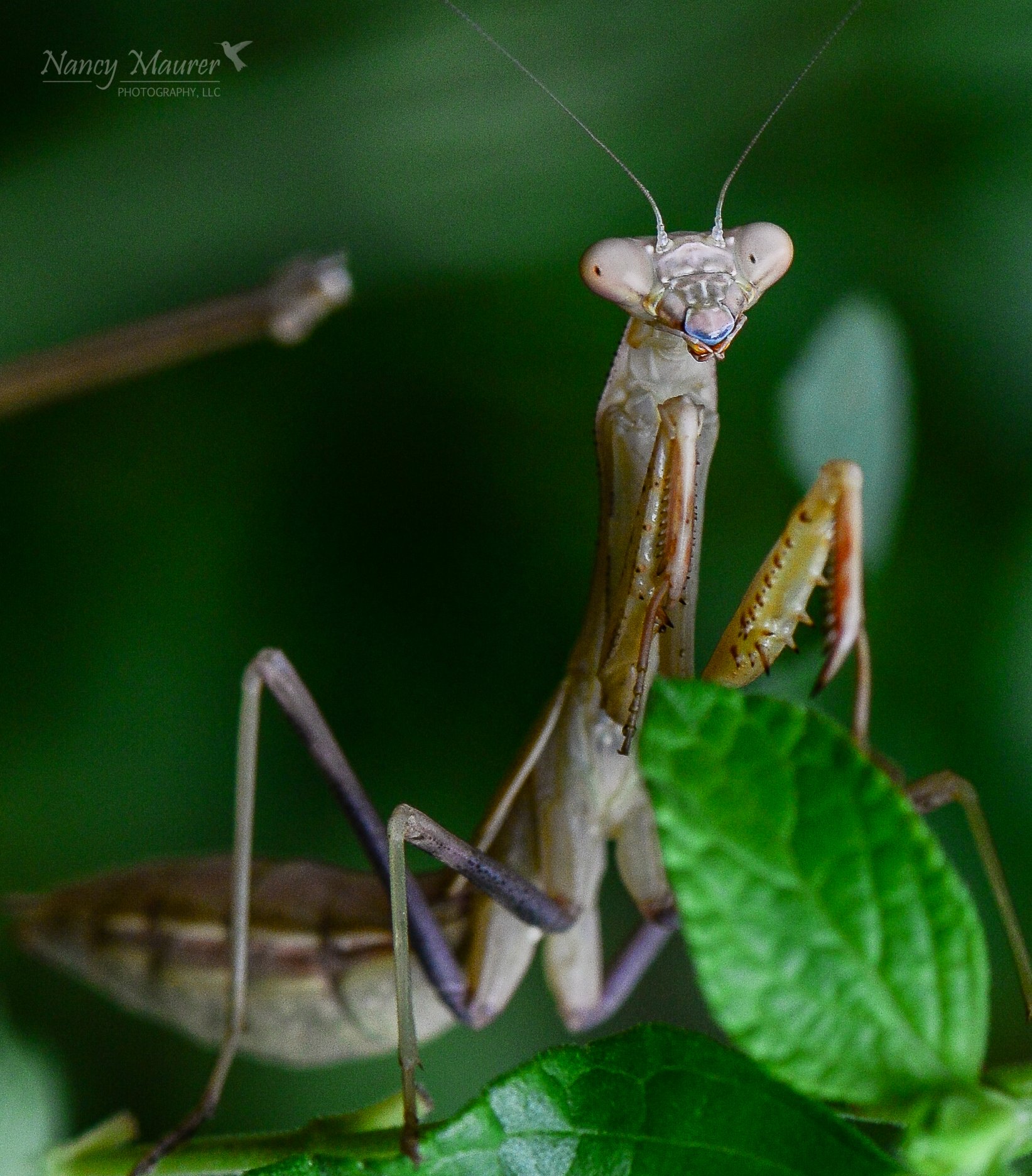 Their common name, praying mantis, seems to come from their habit of holding the front legs up, as if in prayer.  (Saying grace, maybe?) They capture their prey with a lightning-fast strike of those legs, which they then use to hold their prey while they consume it.  Our mantids like to hunt in chapparal, mesquite and oak woodland habitats, and can change colors to camouflage themselves among the numerous shrubs.

Mantids are called opportunistic predators, meaning that they will eat anything they can catch. Though their usual prey are other insects, there have been reports of them catching small mammals, frogs, and even hummingbirds. Adult mantids reach maturity in late summer. Mating begins soon after and continues into fall, assuming there are any males left.

Female mantids are considerably larger than males, and mating is likely to be a dangerous activity for the male, since he may be eaten before, during or after mating. In the fall, the females attach their egg cases, called oothecae, securely to a hard surface, such as a rock, a wall, a tree or other wood, even a plant stem. Shortly thereafter the adults die.

Mantid larvae hatch during the spring, voraciously hungry. Each egg case contains up to one hundred baby mantids. If enough food is not available, they will eat each other, which sounds rather gruesome, but is an important part of keeping nature in balance. The mantids are considered a beneficial insect by gardeners, but if they were all to survive, Nature’s balance would be disrupted, and they would be eating everything in sight. They might even grow to our size! Not a pleasant thought. Nature functions as it should, and the circle of Life continues, uninterrupted.