Another creature that often gets no respect for its efforts is the ant.  There are many species of ants.  Not all can be considered scavengers, but they all seem to do their bit towards keeping the planet clean, even if it is done inadvertently.  Throughout history, and in fables, ants have been regarded as industrious hard workers.  Remember Aesop’s fable about the ant and the grasshopper?  The ant ran about, busily gathering seeds and other morsels to store for his winter food supply, while the grasshopper merrily enjoyed his short life.  Ants have been held up to children as an example of the benefits of a good work ethic, even though the ants are merely doing what their instinct tells them to do—just being ants.

The Black Carpenter ant (Camponotus pennsylvanicus) is a large, widespread species which lives in forest areas, in dead or decaying trees, logs and stumps.  It is active during spring and summer, and its diet is composed of honeydew, insects, and plant juices.  Interestingly, they do not eat the wood they live in.  A carpenter ant nest in a decaying log can be identified by the little piles of sawdust surrounding it.  The sawdust will rapidly decompose into the soil, and the log itself will be more available to other insects and microbes, which will further its decomposition.  If no dead wood is available, carpenter ants may check out houses, but are not a significant threat.  They also don’t sting. 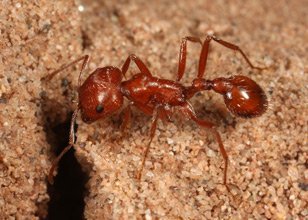 Image of a harvester ant from navajonature.org

The California Harvester ant (Pogonomyrmex californicus), an interesting and well-studied species, is found in the Mohave and Sonoran deserts.  Their large nests are identified by a low crater or mound surrounding the entrance.  Nothing grows in this area.  Their diet consists of mostly seeds.  The foragers go out each day, one by one, searching for seeds, and occasional plant parts.  They gather and store enough to last the winter, when they are not seen, but are ubiquitous during warm weather.  They do have a painful sting.

Pharoah ants (Monomorium pharaonis), the tiny “sugar” (or less complimentary) ants, are the ones most associated with being pests. They invade people’s houses and eat everything in sight.  They are widespread and can be quite destructive.  While it is true that they will gather up crumbs and other small bits of food that may have been dropped, it is best to try to prevent their intrusions, as they are extremely difficult to get rid of.  They do not sting.

During warm weather, ants are everywhere.  They can be seen outside a fast-food restaurant, gathering crumbs, all over the yard, gathering seeds, and generally acting as street sweepers.  It doesn’t take too much imagination to realize how much is cleaned up by the armies of ants in the world.   So watch them,  they are very interesting,   And appreciate the work they do, in their part of the Circle of Life.