A CLOSE encounter with a low-flying raven is an incredible privilege. Hearing the ‘WHOOSH’ of its powerful wings, the distinct cawing broadcasted from tree tops, and the quiet chirping of the raven on its nest certainly leaves one in awe of these large, black birds.

Common Ravens, Corvus corax, is an often spotted bird in the Arizona Mogollon Highlands. Their expansive 53” wingspans, slightly curved beak, and black legs tipped with grasping toes are impressive sights to see. The bodies of these magnificent birds are two feet long and weigh over two and one-half pounds.

Although these birds live in a variety of biomes from the Alaskan tundra to the scrublands of the American Southwest, they are especially well-suited to the habitat of the Arizona Mogollon Highlands.  Large ponderosa pines and exposed cliffs are prime nesting habitats. Breeding season begins early in March and can last through June. To attract a female, males perform impressive courtship displays in the air. Once mated, the pair can be seen flying close together. The nests are composed of sticks and twigs, as well as moss and other soft materials. Ravens mate for life and the same nest may be used year after year. 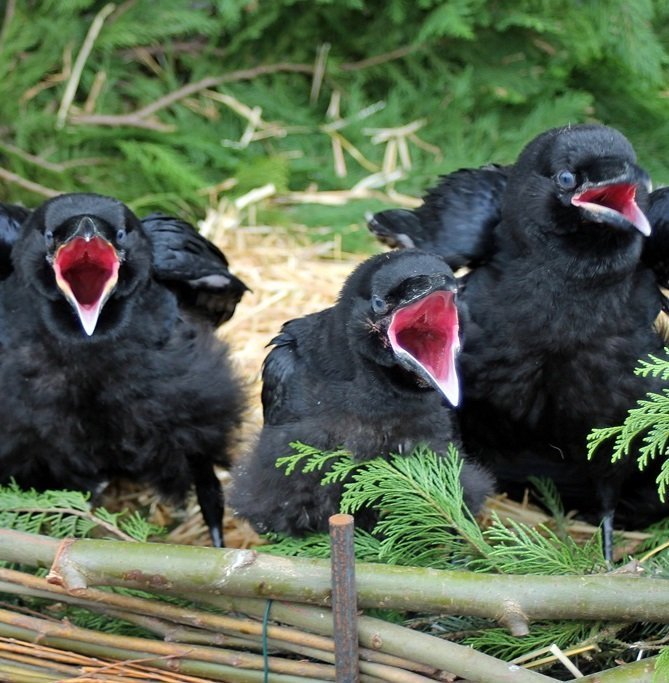 The females lay eggs once a year. Three to eight blue-greenish eggs with brown marks are incubated for 21 days. After hatching, the nestlings are fed and cared for by both of their parents for 35-42 days. The parents continue to care for their young after fledging, teaching them to find food and fly. Ravens are often seen in these small family groups, since the juveniles may remain with their parents for up to five years.

One reason that the raven is so successful is that they are opportunistic eaters. They will eat almost anything , from large insects to carrion. Roadkill provides the bulk of their diet, but ravens also will open containers holding food in order to access the contents. There have even been reports of stealing eggs from other birds’ nests. Their ability to solve problems, access hard-to-reach food, and even remember faces have given them the designation as one of the smartest birds.